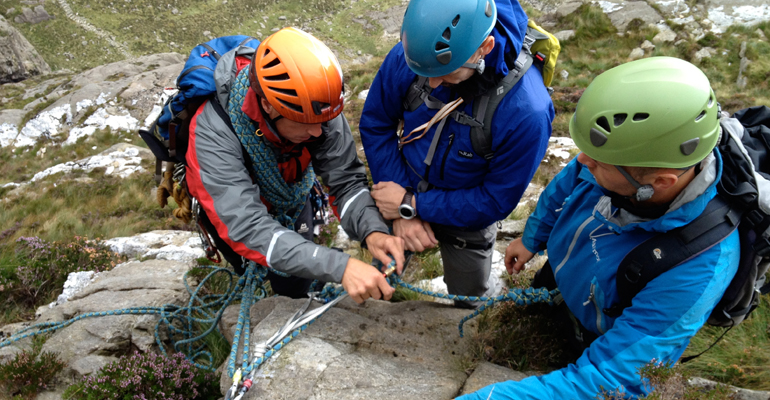 The joy of scrambling comes from journeying through mountainous terrain, often in exposed and airy situations. Scrambling bridges the gap between hill walking and rock climbing, and as such attracts interest from walkers and climbers alike. For me it is best described as mountaineering.

Here in the UK scrambling follows a simple grading system from 1 being the easier end of the scale to 3 being a grade which borders the beginning of the UK graded rock climbing.

Mountain walks with sections of steeper rocky ground requiring the use of hands for progression. The difficulty is on the lower end, however many well-known grade 1 scrambles are exposed. Experienced hill walkers will manage grade 1 scrambles without too much difficulty if they have a head for heights and are well coordinated.

More sustained steeper sections than grade 1, which might have challenging sections of difficulty in serious situations. Route finding skills and being able to anticipate the difficulty are skills that a rock climber will typically have, which a hillwalker might not. Grade 2 will have sections of climbing and often teams will consider carrying some climbing equipment to protect themselves on the more exposed or difficult sections.

Progression from Grade 1 to Grade 3

I often work with keen hill walkers who have completed several grade 1 scrambles and now wish to undertake the higher grades. They have summited many mountains and been drawn to the beauty of the more challenging scrambles.

To progress into harder scrambles, you'll need a buddy. You and your buddy can exchange thoughts on route choice and techniques with the aim of making a rational decision on how to proceed. In addition, without a buddy, you simply cannot make use of a rope for protection.

Leaping forward, then stepping back

I have often had hill walkers want me to teach them how to tackle harder scrambles and protect themselves with the use of a rope. My response is to recommend a tailored rock climbing course which aims to equip people with the skills and knowledge of rock climbing that can be applied to harder scrambling terrain.

Lining up the right conditions to undertake harder scrambles will greatly help. Scrambling becomes more difficult in high winds and when wet. Additionally, in poor weather visibility may become a problem which then obscures or distorts your view of the route ahead. Stick to good visibility and dry weather days - they make for better pics too!

Scrambling is a common activity with plenty of information available on routes. Guidebooks are produced, articles are written so do your homework in advance. Starting out on scrambles that are considered good quality is a must. Interpret the descriptions carefully and pay attention to the keywords such as 'greasy' or 'interesting' as these are often included for good reason!

Going off route and ending up somewhere you don't want to be is a scramblers nightmare and may leave no choice but to abandon ship. Knowing how to retreat back down the scramble will involve down climbing and/or abseiling. It's in these circumstances that the skills of a rock climber really help as it may be the first time that the rope gets fully weighted which is the true test of the system. Never be afraid to leave gear behind and don't cut corners in your anchor selection.

Your nice comfy walking boots might need upgrading for harder scrambles. Invest in some quality stiff scrambling boots which will give you better contact with the rock. Each foothold is an anchor so make sure what connects you to the ground is fit for purpose.

Developing a good understanding of rock climbing techniques to apply to harder scrambles is a long apprenticeship. Many Mountaineering Clubs will run events where hooking up with likeminded or more experienced folks is possible and a good way to start the process.

Another popular option is to apply structure to your learning by employing a qualified Mountaineering Instructor who can help get you started and build up your knowledge and confidence to start undertaking harder scrambles.